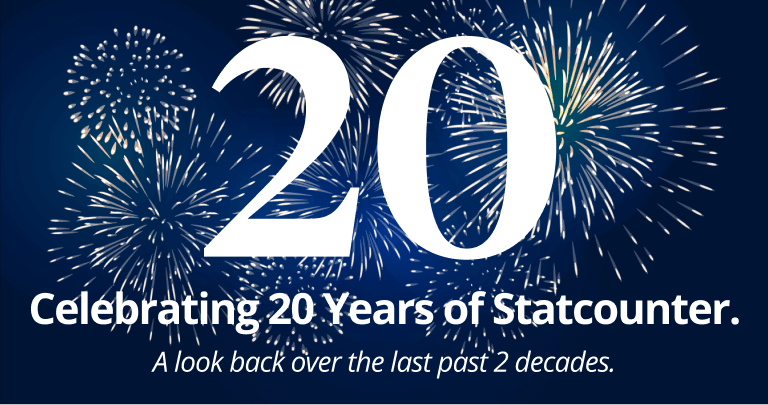 For those of us old enough to remember the mid-to-late-nineties, the dawn of the World Wide Web felt like an era of change and infinite possibility. Prior to Facebook, YouTube and the App Store, the media had us excited about this new frontier called cyberspace where among other things, we could surf the information superhighway. Dial-up modems buzzed and whirred, delivering on the promise of limitless information, free communication and shopping from the comfort of our armchairs.

The web made it possible for anyone to be a publisher. Having a website adorned with animated gifs and blinking text was essential. For businesses, the web opened up new channels of communication and opportunities to break into new markets.

At the age of 16, budding web designer and developer Aodhan Cullen was looking for a way to track visitors to his client’s websites. The only available solutions were either too expensive or would often break.

To remedy this, Aodhan, took it upon himself to build a more efficient website tracker and hit counter to measure the traffic visiting his own client’s websites and display the number of visits to their pages. It soon became apparent that a fast, reliable, unobtrusive visitor tracker was a thing of much value to website owners and before long, plans were set afoot to provide this software as a service to webmasters and website owners. 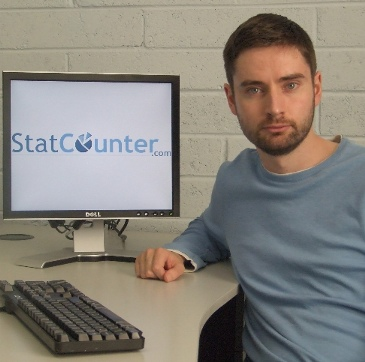 Statcounter’s destiny was sealed in January 2000 when 16 year old Aodhan convinced his Dad to let him borrow his credit card to register the Statcounter.com domain. In the 20 years since, Statcounter has grown into a powerful suite of analytics tools, installed on over 2 million websites, and continues to evolve to meet the needs of its members.

Here we’ll take a look at how Statcounter has developed over the past 20 years with the invaluable contributions of continuous feedback and support from you, our valued members.

Aodhan secured the Statcounter.com domain name and began building an email list of people interested in the service via a temporary holding page. 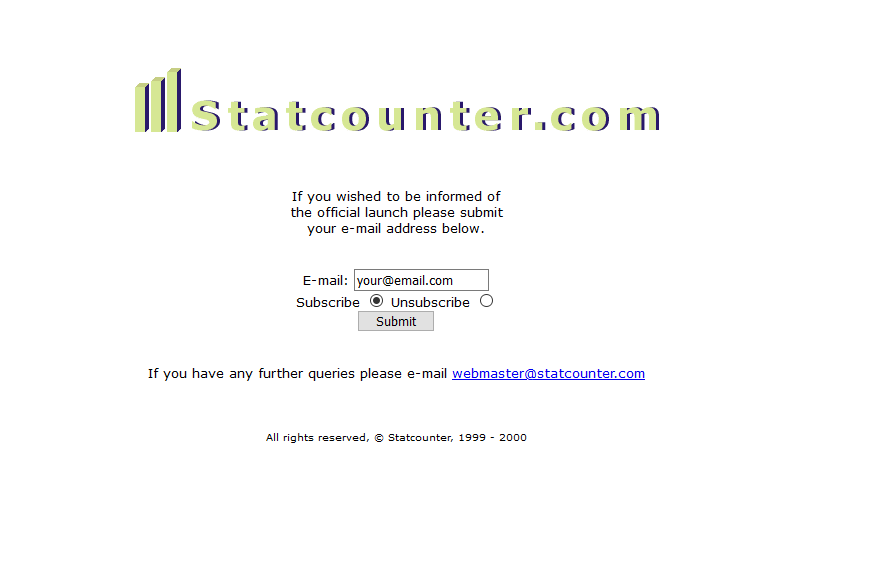 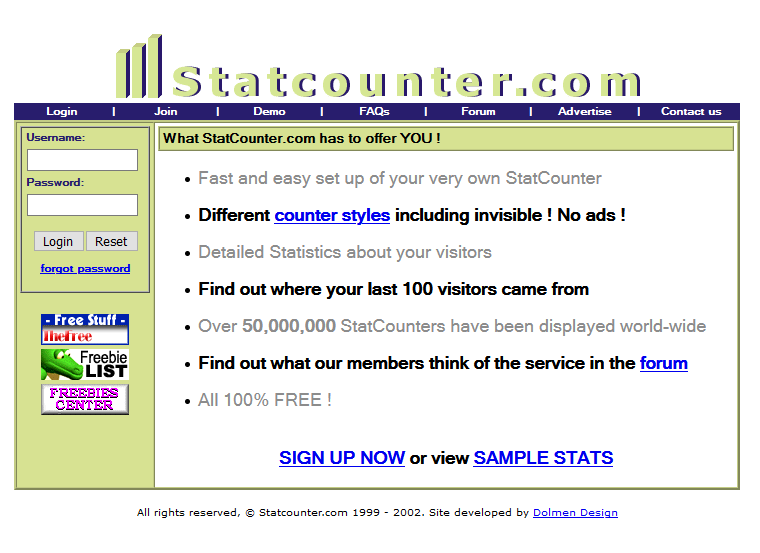 The demand for the service proved too much for the web servers and for a brief period, Statcounter had to refuse new sign ups.

“The new system is performing well. We are planning on accepting members again by Tuesday, 4th February. All the new statistics will not be available from the start, but will be added to and tweaked over the next week.”

The Visitor Paths report is launched, highlighting the navigation paths visitors take through your website. Visitor Paths  remains one of the most popular reports in Statcounter to date.

Due to popular demand, Browser and Operating System stats are added to Statcounter along with Popular Pages and the Magnify detailed visitor report.

The third relaunch of Statcounter in late 2003 included the following improvements:

These were followed in quick succession by additional country, state, city and isp stats in November 2003. 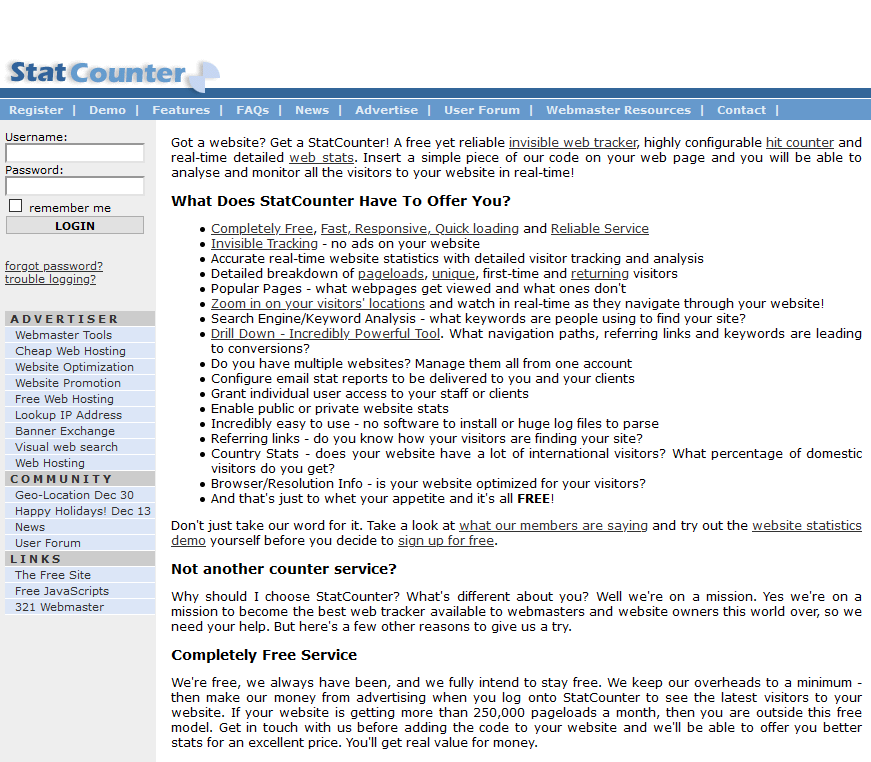 September 2004 saw the launch of Returning Visit Stats, Drill Downs and Email Reports. And for upgraded members, Secure Tracking and an option to disable ads.

A new level of customization was introduced to the summary chart in July 2005, enabling users to change the level of detail, date range, graph type and more. 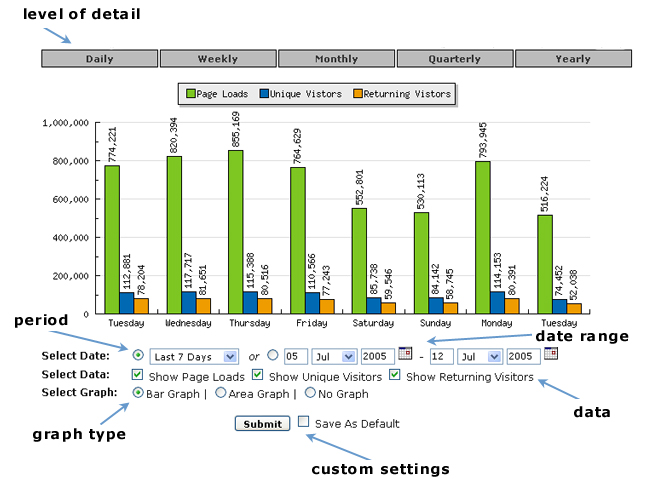 Another hugely popular features in Statcounter, Visitor Labels was introduced in early 2007 and has been helping members identify click fraudsters and recurring visitors.

Version 4 of Statcounter, launched in the summer of 2008 included:

March 2009 saw the launch of the now hugely popular Global Stats service from Statcounter. Global Stats records market share of Search Engines, Browsers and Operating Systems and is used by journalists, web designers and developers as a benchmark of the technology used to view websites. 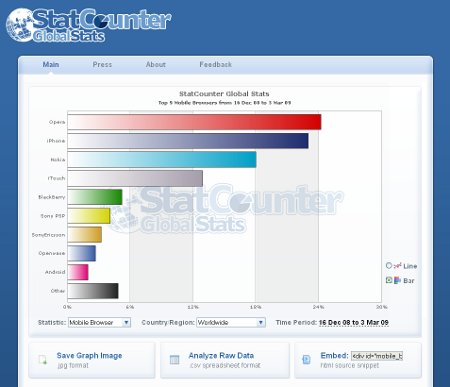 A major change to the design of Statcounter in 2010 included user interface improvements throughout the site and a plethora of new features.

2013 saw the launch of some significant new features in Statcounter, including Filters, Incoming Traffic and Paid Traffic.

The launch of our iOS and Android apps enables Statcounter members to keep track of their websites while on the move. 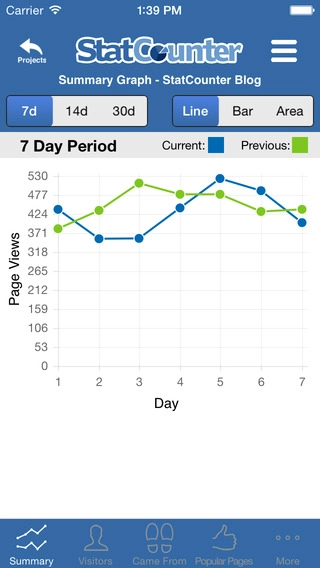 2017 saw substantial changes are to the look and feel of the Statcounter website and user interface. Redesigned from the ground up, priority was given to clarity and ease-of-use by improving the layout, typography, colours, icons, spacing and visual hierarchy. 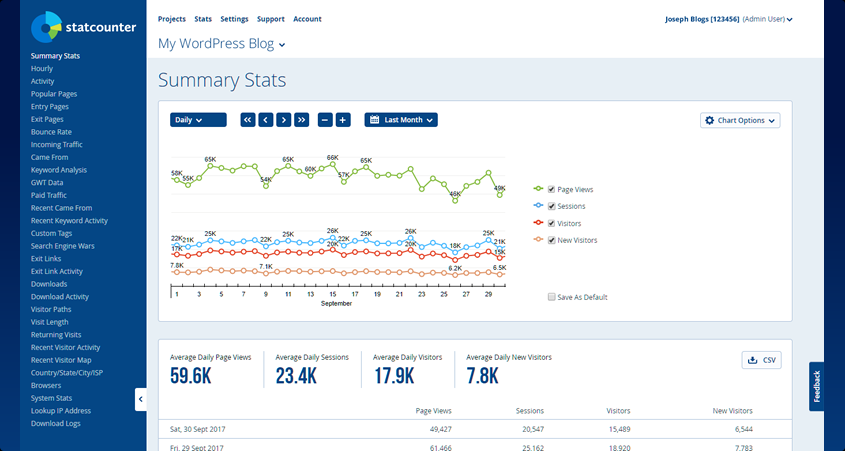 The addition of Visitor Alerts towards the end of 2017 enabled you to set notifications for when individual visitors are looking at your website. An extension of the Visitor Labels feature, alerts help you keep track of important visitors that revisit your site. 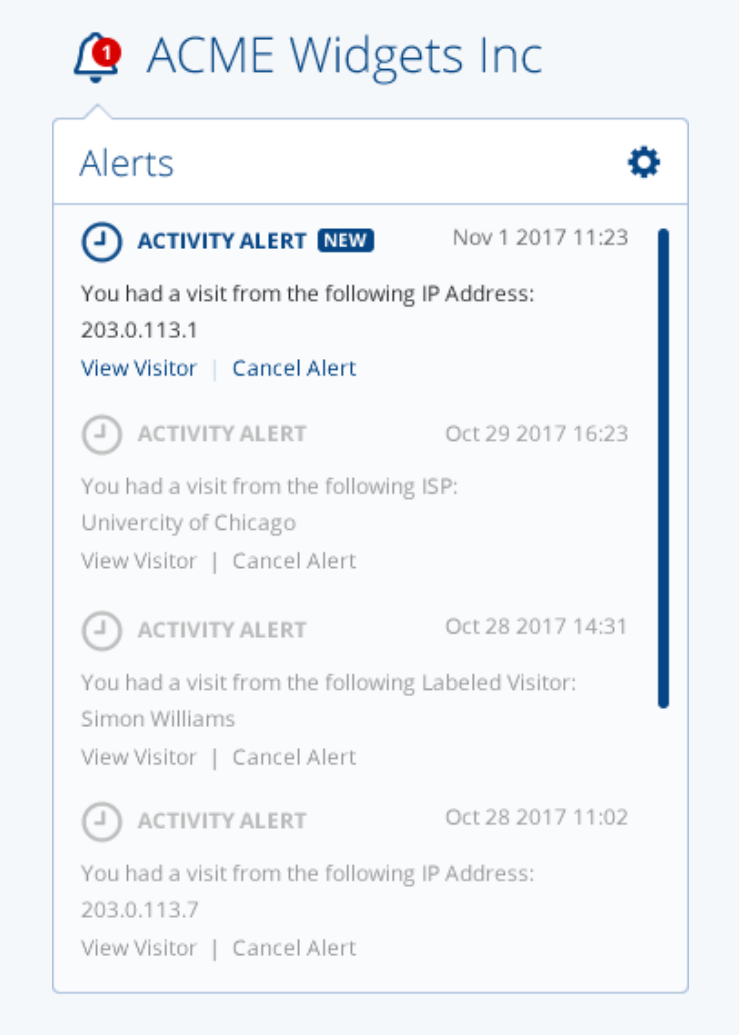 Over the years, the left sidebar navigation had grown to a list of over 30 items. This 2018 update cleaned up the navigation and grouped all the aggregate stats reports together in a new Reports dashboard. 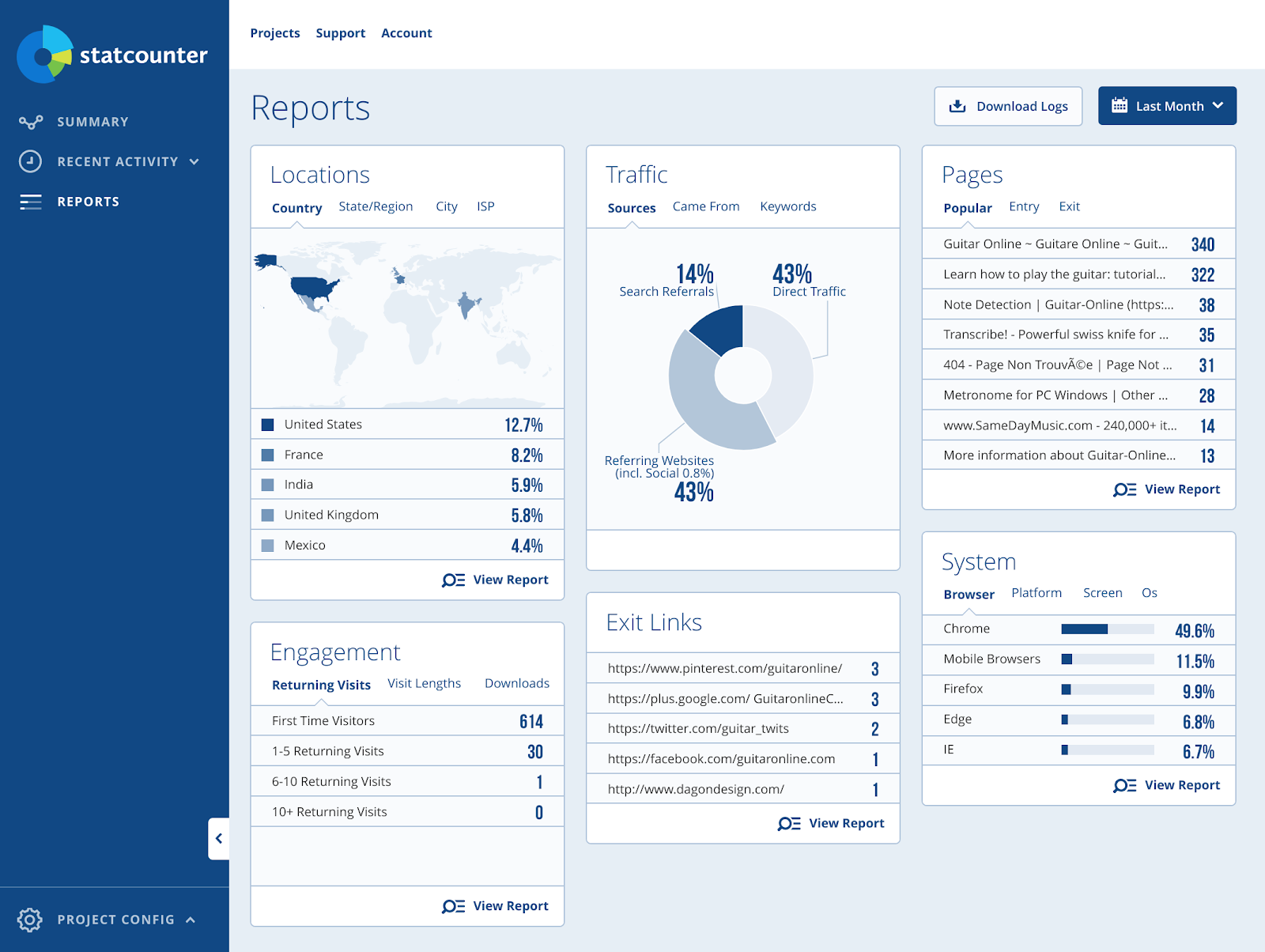 One of our new year’s resolutions for 2019 was to actively help our members be more successful online. The launch or our Learning Center and Success Stories sections coincided with a revamped email newsletter to include feature stories from other Statcounter members on their business and processes, advice on digital marketing, how to get the most out of Statcounter and more.

In September we launched the Pages and page Analysis feature. This section displays trends for individual pages on your site with a breakdown of referrals from search engines, other websites, social media and paid traffic campaigns. 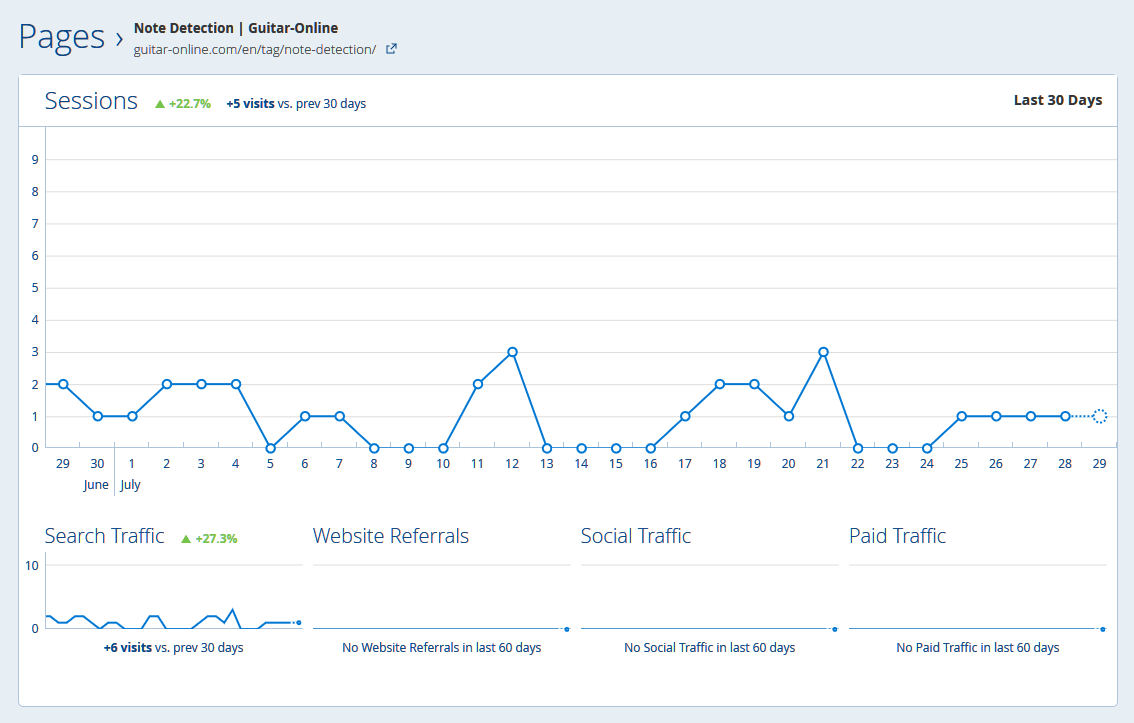 20 years later, our mission is still the same, to help our members understand their users. We’ll be continuing to work on this mission, to deliver even better insights into your users to help you to make the best decisions for your success.

Thank you so much to everyone who has supported Statcounter over the past 20 years and here’s to the next 20!